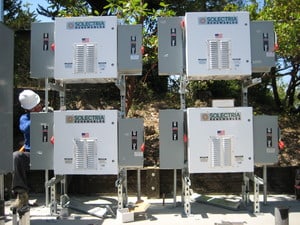 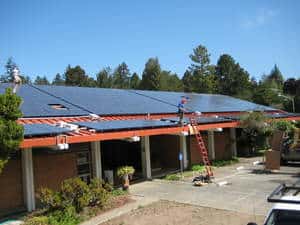 In November 2005 the City adopted the Integrated Water Plan PEIR that recommended proceeding with desalination to address the City’s drought shortfall. One major concern with the project is the large amount of power consumed by a desalination plant, and the associated environmental impacts. Impacts of the large power consumption could be mitigated by investing in energy sources that are “climate-neutral” by not generating carbon dioxide.

Water Department staff researched alternatives for producing “climate-neutral” power for the future desalination plant. After considering all City facilities, staff recommended proceeding with a solar power project on various buildings at the GHWTP. The project is economical since the capital investment can be recovered in reduced PG&E bills, after which the City will save money by generating power.

The project broke ground in June 2008 and the system went online in September, 2008; ahead of schedule.

“We are very pleased with the results of this project”, said Matt Zeman, Senior Project Engineer for the City. “The water department spends a lot of money on power generation. We are excited about the reduced cost and very importantly the move toward becoming truly “climate neutral”.”

“The Sandbar system design was unique and cost effective in that it maximized our power production utilizing fewer structures not requiring additional retrofits.”

“During construction, we were pleasantly surprised by the lack of interruption to Water Treatment Plant Operations and level of professionalism exhibited by the Sandbar crew”, Matt added.

Jeremy has worked in the solar industry since 2006. He has a Bachelor’s Degree from UC Santa Cruz in Environmental Studies. Jeremy has spent most of his solar career in residential sales and Sales Management in both California and Hawaii. He was raised in Santa Cruz County and is passionate about helping local residents make the switch to clean and reliable renewable energy. Jeremy lives on the Westside with his wife and two boys and enjoys music, photography and hiking in his personal time.